Calling all Bulls fans.... On Tuesday May 3rd, Sprinkles Cupcakes will be giving away, free red velvet cupcake for fans wearing Bulls jerseys, shirts and hats. (Limit one free cupcake per guest.)

9am – 8pm
50 East Walton Street, Chicago (Between Rush and Michigan)

Sprinkles will also offer the GO BULLS box featuring red velvet cupcakes starting Monday, May 2 and continuing as long as the Bulls are in the Playoffs. The Bulls box includes a dozen fan-favorite red velvet cupcakes adorned with themed red and white dots and “GO BULLS ($39).”
Posted by Brandy at 1:04 PM No comments: Links to this post

Looking for a fun Mother's Day activity with Mom? Join W Lake Shore, this Mother's Day, May 8th for Moms, Mimosas and Manicures! For $10 all guests will receive a Mimosa and a mini-mani from Bliss. Moms and guests will relax in the Living Room of W Lake Shore while being pampered! Reservations recommended by calling 312-943-9200. 644 North Lake Shore Drive
Posted by Brandy at 9:50 AM No comments: Links to this post

All great expensive shoes must have a lower priced replica right? Christian Louboutin has the very popular bow peep toe sandals seen on many celebs like NeNe Leakes and many more. 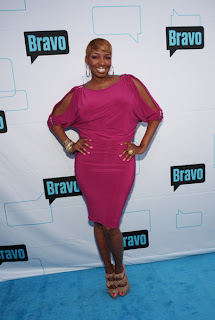 Now you can get the look, for a much lower price with Dolce Vita "Sammi" High-Heeled Sandals for $159. 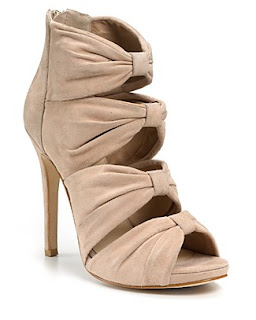 Dolce Vita version
Posted by Brandy at 6:50 AM No comments: Links to this post

Get the boot: Beyonce’s boots worn at Disneyland Paris 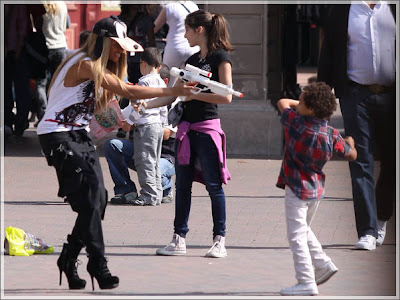 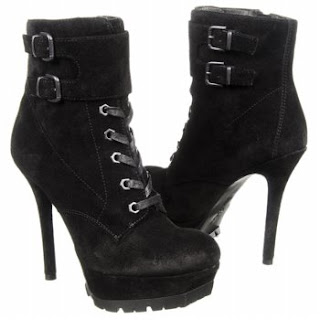 All the gossip and entertainment blogs comments have been in an uproar because Beyonce had on heels at Disneyland Paris. After laughing for awhile I looked at the boots and realized they are the Sam Edelman Vancouver boots (above). Those boots are sooooo comfortable. They have a lot of support and are light as a feather. I now regret not getting them.

I think B looks cute!

You can still find some at Shoes.com , Solestruck and more. Just google the name
Posted by Brandy at 10:05 AM No comments: Links to this post

Rock out or walk away: Kim Kardashian Vs Jennifer Hudson 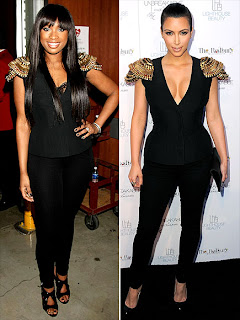 
A couple of weeks ago when I saw Kim Kardashian at Khloe's fragrance launch, I knew I previously seen another celeb wearing the Alexander McQueen vest she wore.

Who do you think rocked this vest and who should have walked away?
Posted by Brandy at 10:34 AM No comments: Links to this post 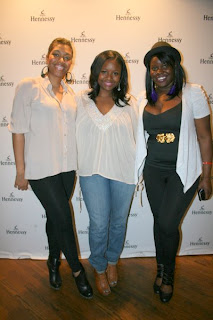 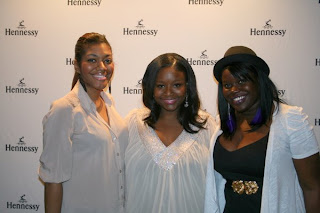 (L to R: Me, Raijean and Jessica LaShawn) Photos by Raijean 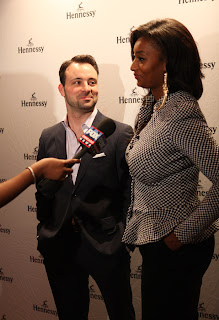 Hennessy VS’, Hennessy Remixed tour took Chicago by storm last week to re-introduce us to Hennessy and their new conncocations of drinks. Hosted by this year’s Lady Hennessy, Toccara (former America’s Next Top Model starlet), and master Hennessy mixologist, Jordan Bushell. they wanted to educate consumers on the blendibilty and versatility of Hennessy VS, and to present the four signature cocktails.

Several events took place: High-rollers reception at Horseshoe Casino on April 7th: Toccara and Jordan hosted a private tasting of Hennessy VS’ latest recipes, as well as its higher Marques, Hennessy Privilege, Hennessey X.O., and Hennessy Paradis for 300 guests. Jordan and Toccara also held a mixology session, and there was on-site cigar rolling.

Shrine Chicago on April 7th: Toccara and Jordan hosted a private tasting and mixology session for 200 guests. Hennessy also partnered with Chicago radio station, Power 92, for their 10th anniversary for being on-air. Guests included personality’s from Power 92, as well as local celebs.

Excalibur on April 8th: Toccara and Jordan hosted a private reception, and mixology session, for 125 guests for them to experience the latest drink recipes.

Luncheon at Park 52 on April 9th: Influencers from across Chicago came out to meet with Jordan and Toccara, as well as to sample the latest recipes.

PHLI Lounge at PHLI Worldwide on April 9th: Hennessy VS partnered with PHLI for an private reception hosted by hip hop artist, Freddie Gibbs, as well as Toccara and Jordan. 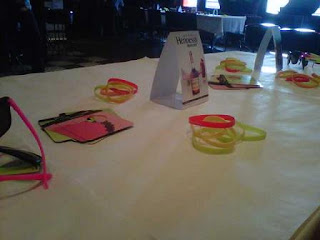 On Saturday, I attended the Media and Influencers luncheon at Park 52 in Hyde Park. Cool Hennessy sunglasses and silly bands greeted us we walked in the door. Drinks started appearing and it was time to taste. 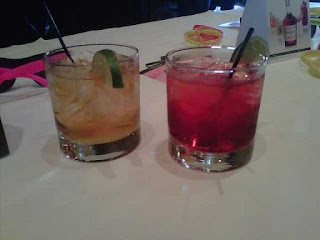 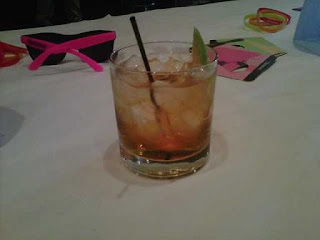 Personally I was a little hesitant because I am not a cognac drinker at all. But I was willing to try.

We noshed on appetizers like ribs, chicken quesadillas, and a kabob of garlic chicken and peppers. Yummy!

Toccara was a sweet heart, mingling and interacting with us while even stopping by my table and noshing on the ribs she brought over. Great times!

I had the pleasure of attending the Chic Boutique presented by Chicago Social Magazine on Thursday March 31st where vendors: eDrop-off. Akira, Veruca Salt, Fashion House, Handle with Care and more showed off their stores wonderful clothing and jewelry options. Wine provided by Voga and can I say was so delicious! The stylish attendees soaked up the variety of clothing options and new ideas for style. I had a blast! 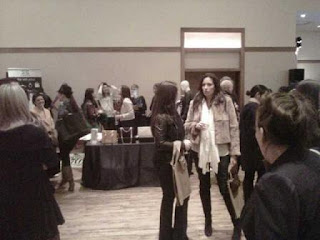 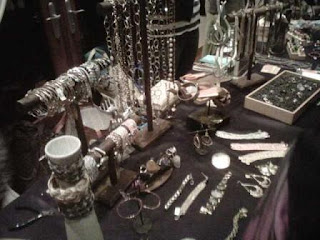 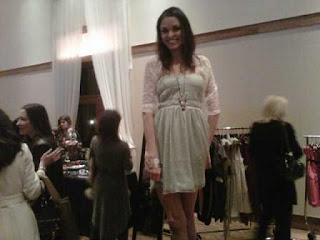 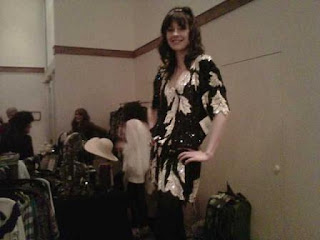 
On Saturday I hit up the opening of clothing boutique Block 857 in the heart of Lincoln Park. The owner Kelli is a sweetheart and offers a range of women pieces and jewelry in a chic setting that you will not find in other boutiques. Prices will run you about $100-300 with more affordable jewelry from lines such as House of Harlow. 857 W. Armitage Chicago, IL 60614 http://www.shop857.com/ 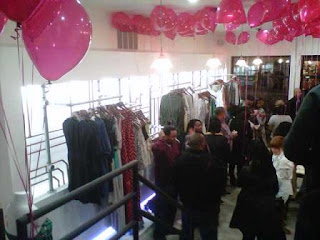 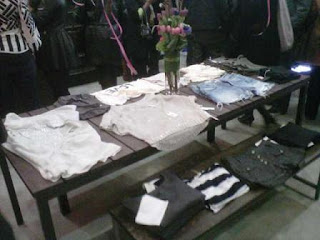 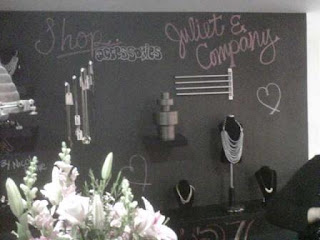 Posted by Brandy at 9:52 AM No comments: Links to this post